As I have so overly shared I was in Europe this summer for four weeks. I visited Germany, Austria, Scotland, and England. Being the knitter that I am I started planning my travel projects weeks before I was leaving.

First I planned the patterns I was going to bring with my to buy yarn for, then I searched the stash and found patterns and yarn that I wanted to work with while I was abroad. I decided on two pairs of socks and two shawls.

My knitting didn't go quite as I expected. When I traveled abroad before, working on my shawls was not a big deal and I had plenty of time. This time around no shawl knitting happened until the plane ride home! I was gone for four weeks and didn't even finish/start any of the shawls that I brought with me! 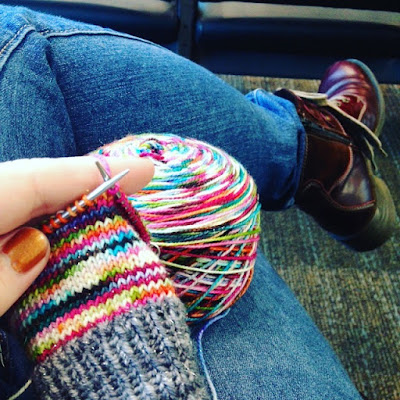 So what did I do...knit 4.5 pairs of socks! One pair of socks per week that I traveled! So happy and a bit stunned. I've really been focused on shawls this year and haven't been working on my socks quite as regularly. These were the perfect travel project, easy to pickup and put down, get shoved in my purse and completely mindless. I brought yarn for two of the pairs and while abroad I bought the yarn for two more!

The first pair finished was the pair I started at the airport waiting to depart from California. These were made from stash yarn and so much fun to knit. I don't usually do contrast cuff and toes but all the podcasts that I've been watching use contrast and I had to try. Personally, I think they turned out pretty great! 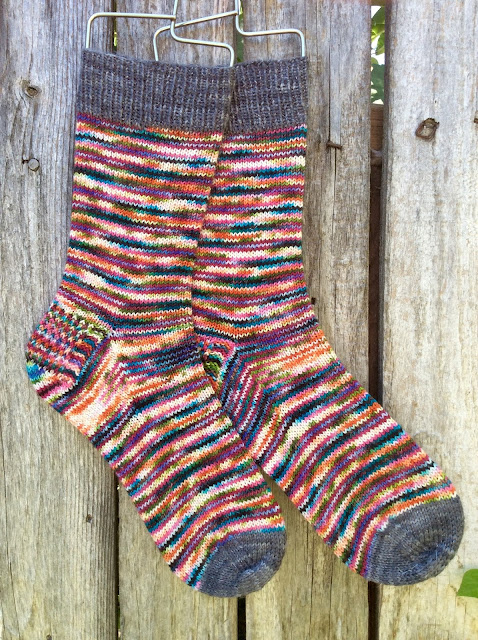 Each of these socks was knit on a US 1.5 with a 9 inch circular. They either had a 60 or 64 stitch cast on with an eye of partridge heel. I was very inventive when knitting my travel projects...

The second pair that I cast on was yarn bought in Bonn, a cranberry tweed that I have been yearning for but not seen in the US. I couldn't believe that the first store that we walked into had the yarn that I was craving! Happy knitter. These took one week exactly to finish, which means I was able to wear them while on my trip! 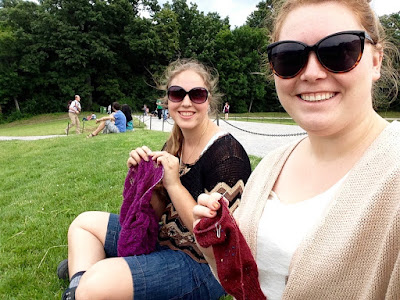 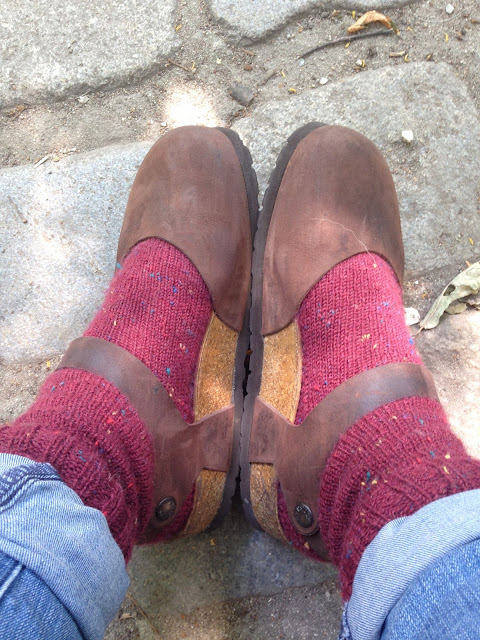 During my stay in Europe a large football tournament (soccer for the Americans) Euro2016 was playing, which means I watched a lot of games. In the Cologne yarn store I found the best way to commemorate my trip, sock yarn in the German flag colors! Yarn was made for each team in the football league. So cool that I was to find Germany! 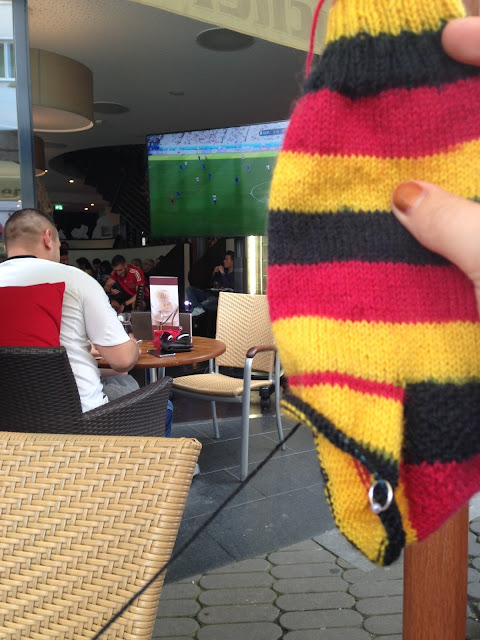 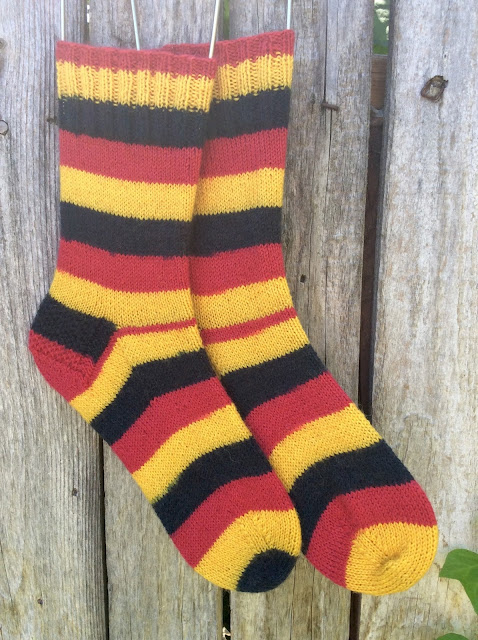 My last pair that I finished was self-striping Felici yarn from Knit Picks, the colorway name was Highlands. Which I why I started them on the day I arrived in the Scottish Highlands! Mom also is a knitter and had this yarn so we both knit on them! 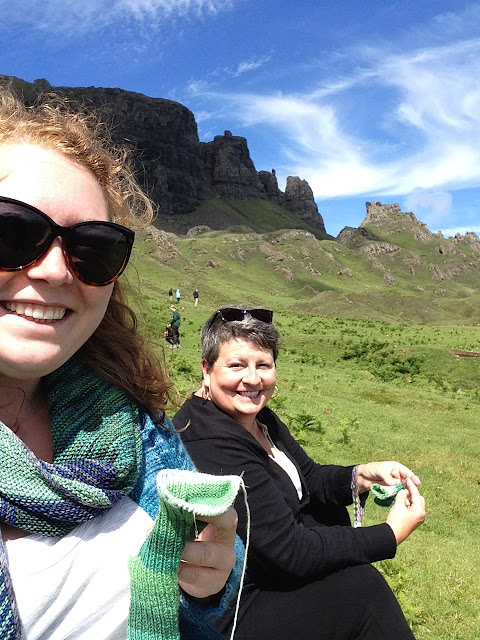 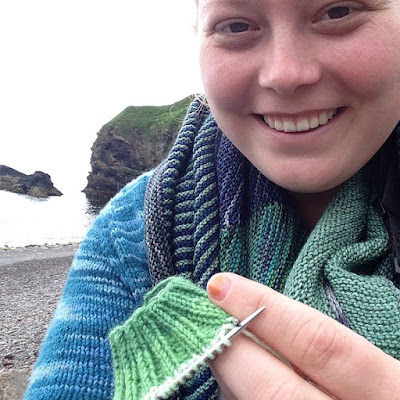 These ones took me the longest to finish, but I finished them before I left the UK so I was pretty dang happy. They fit like a dream and are so comfy, I love Felici! I have to say I felt pretty awesome in my hand knit sweater, shawl, and working on hand knit socks. I was rocking it. 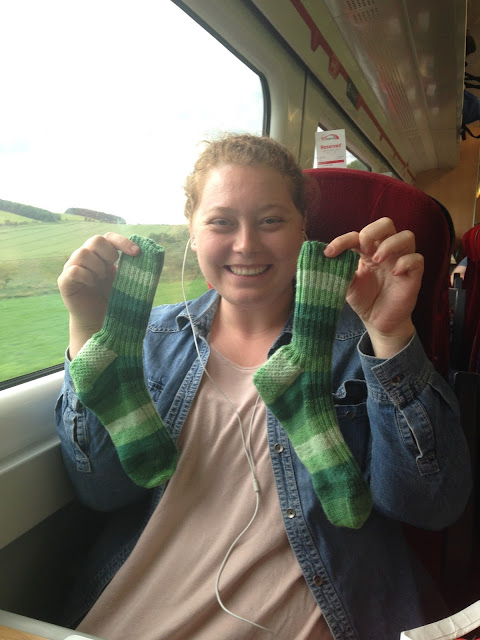 So these are all the sock projects that I finished while abroad. I'll have nice toasty feet and wonderful memories of making them when fall arrives!
Posted by All Knit Up Designs at 12:30 PM